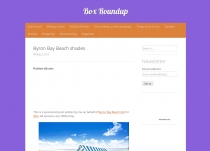 I recently tried a new wine club called Winc. The wines were provided by the company for testing. Upon registration, I was asked some questions about my tastes such as do I prefer earthy flavors or sweet flavors, do I like dark roasted coffee or more lightly roasted coffee etc… My answers to these questions were supposed to help determine what wines might be most pleasing to my palette. I was a little skeptical since there were no actual questions about wine except the color I preferred. I decided to give Winc a try and see if they could deliver high-quality personalized wines.

The wine arrived a few days later nicely packed and I had to sign for it naturally. The first thing I noticed was a lack of a foil wrap around the cork, which surprised me a little but isn’t a cause for concern.
I chose the first bottle based on the attractiveness of the label. The wine was called Brethren of the Road, a 2016 red blend from Redwood Valley. Winc appears to bottle all the wines themselves, but the winemaker was a 3rd party called Kenny Likitprakong. The wine had a strong aroma and I was concerned it was a fuller body than I’m used to. I try to steer away from Cabernet Sauvignons for this reason. However, once I took the first sip, I was pleasantly surprised. The wine had a refinement that I didn’t expect from the price or year. It had a complex flavor with notes of fresh berries, together with an acidity that worked very well.
The second bottle I tried was a 2016 Primitivo called Kin and Country from Lodi California. A Primitivo is not that common a variety, but I would say it’s closest cousin is Zinfandel. This wine had a less punchy aroma, but the tastes again were fairly similar to the previous bottle, but there was also a pleasing vanilla note which actually was a little overbearing. Nevertheless, the berry notes and acidity were spot on.
I also tried 2 other red blends, Invoke, a 2016 syrah from SLO and Passarola, a 2016 Vinho Tinto from Portugal (finally one not from California). My favorite was probably the Portugese Tinto largely because the flavors were a nice departure from the familiar California vintages, more exotic and complex.
Overall, I thought all the wines were excellent for the price. I’m a $15/bottle person, so I don’t have particularly refined tastes or needs. The wine from Zinc fit the bill nicely. I thought they did an excellent job pairing the wines with the palette questions on registration. I think I’ve found my new vino supplier.
Winc offers 4 personalized wines each month. Bottles start at $13 each. http://www.trywinc.com/usfamilyguide
Leave a Comment
submit a review Join our blog team

Proud Member of The US Family Guide Network